Collection of Proses in Marine Sciences Within the cooperation between the National Museum and the Institute of Oriental Manuscripts in Saint Petersburg in the Russian Federation. On Monday, November 22, 2021, the manuscript "Collection of proses in Marine sciences"(Al-Safaliyah, Al-Mu’allaqiyah, and Al-Ta’i) by the Omani navigator Shihab al-Din Ahmad bin Majid as-Sa’adi, was inaugurated on loan from the Institute of The Oriental Manuscripts in St. Petersburg. Under the patronage of His Excellency Salim bin Mohammad al-Mahrooqi, Minister of Heritage and Tourism and Chairman of the Board of Trustees of the National Museum. With the participation of Prof. Dr. Irina Fyodorvna Popova, Director of the Institute of Oriental Manuscripts in St. Petersburg, in the Maritime History Hall of the National Museum.

His Excellency Jamal bin Hassan al-Moosawi, Secretary-General of the National Museum said, "The presentation of the original manuscript of a group of poetic scrolls in maritime navigation (al-Safaliyah, al-Mu'allaqiah, al-Ta'i) by the Omani navigator Shihab al-Din Ahmad bin Majid as-Sa’adi. He came in the context of the existing cooperation between the National Museum and the Institute of Oriental Manuscripts in the Russian Federation. Coinciding with the Sultanate’s celebration of UNESCO’s inclusion of the Omani navigator Ahmed bin Majid in the list of globally influential personalities, he became the sixth Omani figure to be included in the program of commemorating important historical events and globally influential personalities. The manuscript on display is considered the oldest in the world, and after five centuries it will be available to all visitors to the National Museum for a period of three months. It is noted that the National Museum also displays the manuscript of the Omani navigator Ahmed bin Majid as-Sa’adi “the Book of the Benefits of the Principles and Foundations of Seamanship” loaned from the al-Assad National Library in the Syrian Arab Republic.

On her part, Prof. Dr. Irina Feodorvna Popova said “In history, the name Ahmad bin Majid is very important, where at his time he flourished. Ahmad bin Majid left a collection of poems that represent his navel chats and still exist in the manuscript form that are collected and kept in the Institute of Oriental Manuscripts in St. Petersburg Russia. The poems summarise his navigation in the Indian ocean, where he taught the Europeans a lot within the field of marines and navigation and this represent a cultural bridge between the Arabs and the Europeans.”

Ahmad bin Majid is the author of nearly (40) books, works of poetry and proses. Among them, a collection of Arajiz (poems) in marine science entitled; Urjūzah Moa’lakiya, Urjūzah Alttayiya, and Urjūzah Sufalia. The poems published on 1377 AH/ 1957 CE within the book “Three Unknown Rahminjaz” , translated and published into Russian languagem by the orientalist Theodore Chomosky based on this version of the manuscript, which is currently preserved at the Institute of the Oriental Manuscripts of the Russian Academy of Sciences in Saint Petersburg, the Russian Federation. Later, the manuscript translated into Arabic and entitled: Thalath Azhar ti Ilm al-Bihar (Three Flowers of Marine Science).

The Manuscript compiled 3 proses (Arajiz); Urjūzah Sufalia (761 verses), Urjūzah Moa’lakiya (272 verses) and Urjūzah Alttayiya (54 verses). The manuscript is preserved in St. Petersburg. It was written in the 11th century AD / 16th century CE, during the period of the Nabahina kingdom. It is made of leather and paper, and written in black and red ink.Today, the Oriental Manuscripts Institute includes about 1,155,593 manuscripts and printed works, in more than 65 oriental languages. The total number of the Institute’s holdings is much more than that.

Ibn Majid is one of the best-known navigators in the Indian Ocean and among the finest scholars of the art of navigation and its history among the Arabs. He was the inventor of the magnetic needle (magnetic compass), which is used for navigation and orientation at sea. He was also the author of nearly forty works of poetry and prose. Among his many books on oceanography, Fawā’id fī-Uṣūl ʿIlm al-Baḥr wa-al-Qawāʿid or (The Book of the Benefits of the Principles and Foundations of Seamanship), which was compiled in the year (880-895 AH / 1475-1490 CE) at the end of his life, which is considered as one of his best. He is remembered as Shihab ad-Din “Star of the Faith” and “The Lion of the Sea”. 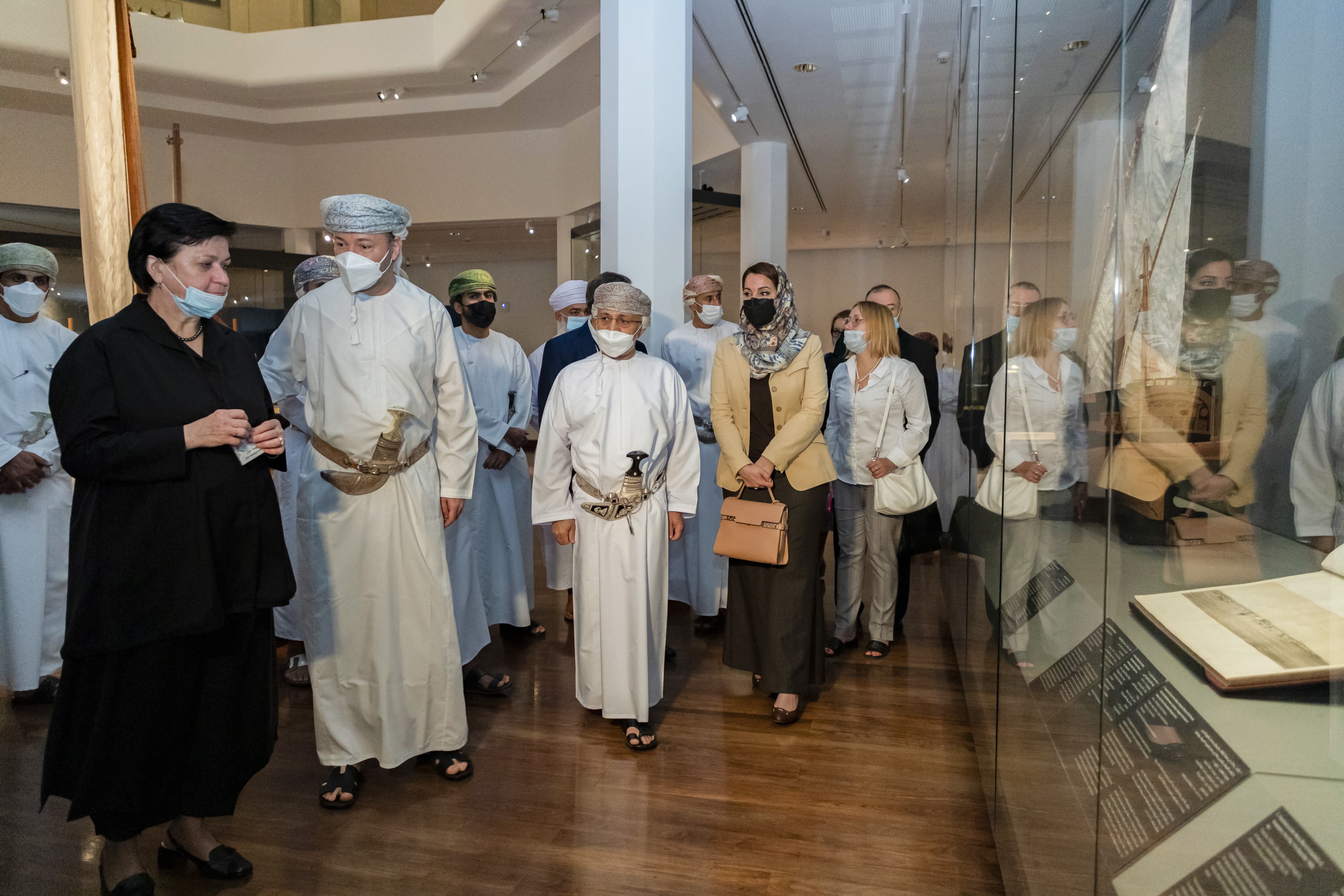 He was a figure of interest to orientalists, such as the French orientalist Gabriel Fran (1925 CE), and the English orientalist Gerald Tebts (1970 CE) and others due to his great knowledge in topics that include shipbuilding, compasses, captain's characteristics, knowledge of countries and their history, dates of travelling, and others.

The National Museum is the Oman’s flagship cultural institution, showcasing the Sultanate’s cultural heritage from the earliest evidence of human settlement in the Omani Peninsula to present day through which we look forward to our promising future. The Museum was established by Royal Decree 62/2013, issued on 16 Muharram 1435 AH (corresponding to 20 November 2013), as a legal entity with financial and administrative independence and the capacity to own, manage and dispose of tangible and intangible assets of Oman's cultural heritage, in line with internationally recognized experiences and standards in classifying ancient museums. The Museum aims to achieve its educational, cultural and humanitarian mission by consolidating noble Omani values, activating belonging, and raising public awareness among citizens, residents and visitors about Oman, its history, heritage and culture, and by developing their creative and intellectual abilities, especially in the areas of preserving evidence, collectibles, and highlighting the cultural dimensions of Oman, and by employing and adopting the best practices and standards in the field of museum sciences.