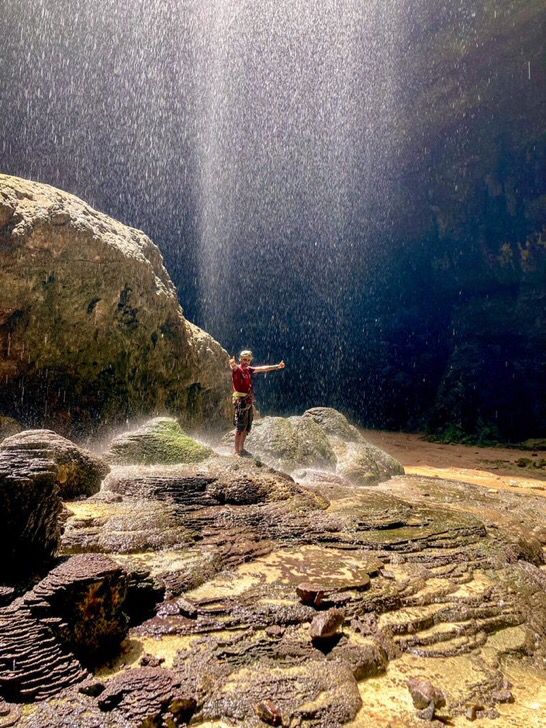 The Omani exploration team, in cooperation with the Geological Survey and Mineral Resources Authority and the Mahri Language Center for Studies and Research, documented Fugit Khesfit (also known as Barhut Well), during a visit to Al-Mahra Governorate in the Republic of Yemen, as part of its work to study caves.

The team went down to the bottom of the well, documented the hole's geological and environmental features with a set of images and data, and collected a group of rock samples from it. The team will publish a detailed report on the drilling and its geological surveys in the coming days.

The Fujit faucet appears as a landmark that emerges clearly from satellite images, and the width of its external aperture is about 30 meters. It is located between small plains and mountains consisting of limestone, and a group of small slits pours into it. This deep hole has been associated with many legends that have spread in the media.

The depth of the alleged Barhout well is 112 m, and its width at the surface is 30 m. This width expands at the bottom of the hole to reach 116 meters. The width of the gap generally varies according to the strength of the surrounding rocks and their different parts, as the hole expands relatively in the less solid rock layers. The circumference of the hole is generally circular.

At a depth of approximately 65 m from the surface, water emerges from the sides of the hole to form beautiful waterfalls. These waterfalls vary in the abundance and continuity of water flowing from them. The eastern waterfall is the most active, while the water flow is interrupted from the southern waterfall.

The hole contains various cave deposits, and a variety of living creatures live in it, including snakes, frogs, and beetles. Some stalagmites and stalactites are more than 9 meters long.

The Omani team is seeking to explore the caves to visit a group of caves in the province. The team thanks the local authority in Al-Mahra Governorate for all the facilities provided to the team during its visit.