Conservation of Leopards in the Sultanate 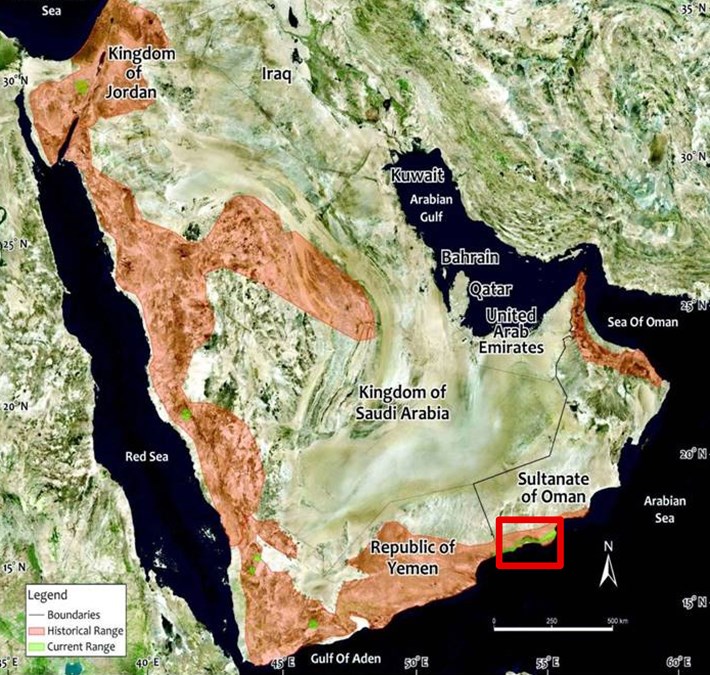 According to a status report on the status of the leopard on the Arabian Peninsula conducted by The World Conservation and Cat Specialist Group; Panthera padrus (the leopard) used to be present throughout most of Arabia. However, killings by hunters, shepherds have increasingly endangered the leopard’s population over the last 100 years as a result of the depletion of its prey base. “The leopard is globally red listed as Least Concern, but P. p. nimr is classified as Critically Endangered (IUCN 2004) and is listed on Appendix I of the Convention on International Trade in Endangered Species (CITES)” ( Spalton, Al Hikmani, Aljahdhami, & Willis, 2006).

Leopards were known from the monsoon woodlands of Jabal Qara in the Dhofar Mountains of southern Oman, and a specimen was collected from Jabal Samhan. Leopards were captured in Jabal Samhan in 1985, and the first captive breeding group was created ( Spalton, Al Hikmani, Aljahdhami, & Willis, 2006).

A single skin was collected from the Al Hajar range in northern Oman, where the last leopard was thought to have been killed in 1976. Specimens were retrieved from the Musandam peninsula during a killing spree in the early 1980s, with the most recent reported record of two animals killed in 1997 ( Spalton, Al Hikmani, Aljahdhami, & Willis, 2006). As stated by the report; Camera-trap studies in Jabal Samhan, Dhofar confirmed the leopard's continued existence, with over 200 images of 17 leopards taken between 1997 and 2000. The presence of 9-11 leopards has also been confirmed by ongoing camera trapping in the Jabals Qara and Qamar, which stretch west from Samhan to the Oman-Yemen border. In 2001-2005, a range of these leopards were fitted with GPS satellite collars and tracked.

In August 2020, the Diwan of Royal Court's Office for Conservation of Environment (OCE), reported that there is an estimated number of less than 200 leopards in the wild, which can be found in Yemen's Dhofar Mountains and surrounding areas.

The Organization for the Conservation of the Environment (OCE) has published images of an Arabian leopard, claiming that the animal came out to enjoy the nature and the atmosphere of khareef in Dhofar. ‘This was due to the authorities in Oman's comprehensive conservation and protection efforts,' as stated (Arabian leopard spotted in Dhofar, 2020).