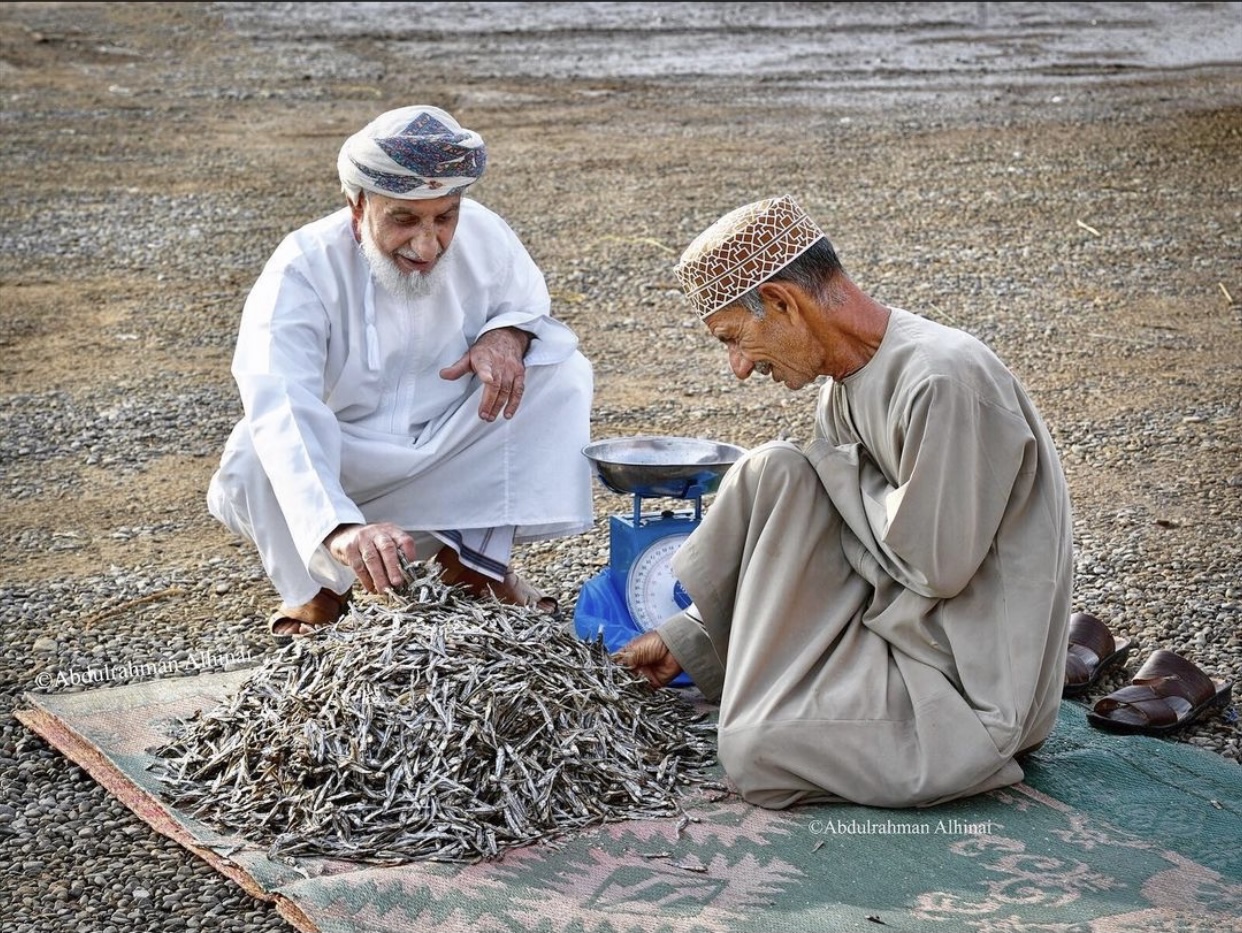 Historical accounts in the Gulf region depict the notable coexistence of people and the sea. Archeological expeditions have uncovered rewarding evidence of prehistoric ships, imported goods, the exploitation of maritime resources, and a wide range of mollies and fish remains from coastal sites in the Sultanate of Oman in the last three decades. Today, fishing communities that extend from Ras Musandam in the north to Dhofar in the south inhabits the Sultanate of Oman’s coastline. As the main catch, the sandy nature of the coast in the north, in particular Al Batinah, yields sardines and other small pelagic species. The Gulf of Oman's remaining rocky coastline; Musandam, Muscat and Al-Sharqiyayah fish catches like shark and tuna is possible. Where as, in Dhofar the fishing community are mainly along the sandy beaches where fishing takes place in winter (ElMahi, 2000).

Traditional societies in Oman were faced with unavoidable conditions, whenever the catch of fish was good; they introduced techniques for stopping chemical changes that turn their variable fish capture into an inedible and non-poisonous substance.

The fish requires exposure to light in order to dehydrate and successfully dry. Salt is used in some instances in this drying and preservation process. The loss of moisture by the drying of salt and the sun inhibits the activities of bacteria and prevents their decomposition. With two different fish sizes, the process of drying is carried out.

Known as al-malh; by extracting the head and entrails, fresh fish is prepared, divided into fillets with longitude slices, and each filet is coated with salt. The salt causes fish to dehydrate, which, stops bacteria, prevents autolysis and decomposition. The salted fillets are placed in a tin box and as the fillet is layered more salt is applied. For more than a year, salted fish may remain suitable for human consumption.

Another type of storage is known as al-kaba, a hole is created in the sand along the beach, depending on the amount of fish the size of the hole. It is then covered with a mat of date trees made of long rachis leaves and then covered with another mat of date trees made of long soft leaves. The fish are placed on top each other and well bound and wrapped on upper and lower parts. It is then laid in the hole and covered by sand and left to dry.

“Another method of storing is Berka (Basin) to preserve fish. A basin is built of stones inside a small room with a small door. Such a hoarding facility such as berka is built within the enclosure of the family house. The salted fish is then placed and the water extracted from the salted fish will remain in the basin. The fish can stay here for a long time until it is traded or used” (ElMahi, 2000).

The two main types of small fish preserved in Oman are sardine and anchovy. "Also known as al-oma or anchovy, the Indian oil sardine is known as al-qasha, without initial splitter or any other treatments, both species are dried intact" (ElMahi, 2000) by being scattered on the sandy beaches and exposed to the sun, Al-oma is dried out. Fishing for sardines is a seasonal practice in the sultanate that takes place in winter. Sardines that have died in this way are commonly used for animal feeding and plant fertilization. To prevent silica degradation, the protection of al-qasha or anchovy is carried out on rocky grounds away from the sand. In a projectile known as 'minhaz' it is commonly pounded.

Shark, guitar fish, king fish, spotted eagle ray, sailfish and many more are large fish types that are used in this process. The fish is sliced into fillet pieces, removing the head, tail, fins and spine. It is contained in a drum filled with salt and water. The pieces of fish remain soaked from early morning until late afternoon. It takes about two days for shark meat and then it is hanged on wooden beams or laid for days on pebbles until it is fully dry, known as al-owal.

The processing of shark flesh for shipment to the inland area is an important seaside industry. Similarly to biltong, it is dried in the sun and largely imported inland (ElMahi, 2000).