The first and only show cave in the Gulf 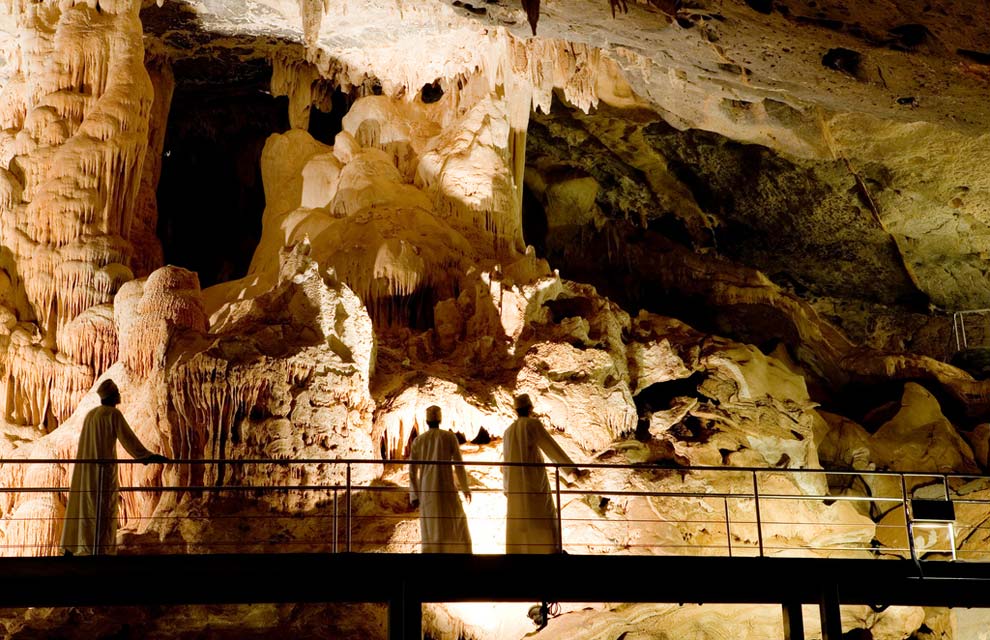 Estimated to be over 2 million years old, Al Hoota Cave is located at the foot of Jabal Shams, in Al Hamra district. The cave was first opened to receive tourist on the 17th National Day November 2006, after setting walkways, stairs and a light system to make the cave an enjoyable and safe experience for visitors. It is the first and only show cave in the Gulf area, which is accessible to the general public.

The total length of the cave is around 4.5km, of which 500m is open for tourists, in other words, around 10% of the entire cave distance is for touristic use. The tour inside the cave is about 45 minutes with the guide, who will stop visitors in different points to share with them on the story, history and formation of the cave.

Al Hoota Cave contains a rich ecosystem that includes two lakes, one is a small northern lake and the other one is the central lake. The underground lake estimates to be holding 30,000 cubic metres of water. The main lake is 800m long and 10m wide, with a maximum depth of 15m, where you can find rare blind fish “garra barreimiae.”

The cave houses over 100 animal species, including bats (Rhinopoma Muscatellum), arthropods, mollusks, big sparassid hunter spiders, snails, water beetles (Aglymbus gestroi), and other rare and endemic species. Al-Hoota cave system, like many other caves in Oman, was formed by the dissolution of limestone by acidic water.

Caves might be seemingly made of stone, but they are made by water. It all starts when rainwater dissolves carbon dioxide from the atmosphere or soil, producing a dilute carbonic acid that dissolves the limestone, creating room for it, thus forming the cave. 10mm of water dissolves its way through rock in 1000 years.

The formation of the cave is entirely natural, and consists of stalactites hanging down from the ceiling, and stalagmites reaching up from the floor, forming interesting and sometimes uncanny shapes, such as “the lion.” Some of the columns and curtains were formed over millions of years, and all structures are softened due to the flow of water.

Due to a recent increase in number of visitors, it is essential to make reservation in advance. Please note that due to scientific reasons, the number of visitors per day is limited. By booking your tour, you are not only making it comfortable for yourself, but also aiding directly with the conservation effort of this natural resource.

Once the reservation is made and the time of the tour is communicated, the visitors have to be at the ticketing desk 15 minutes before the tour starts in order to get the tickets on time. Payment by both cash and credit cards (Master card and Visa) is accepted.

1. Eating and drinking are not allowed inside the cave.

3. Special needs and health problems should be declared in advance.

4. The itinerary inside the cave is about 800m and will take you around 40 min of walk to complete.

5. 225 ascending stairs are embedded inside the cave.

6. Children are under parents' supervision and responsibility.

7. Some areas in the cave may be wet and slippery.

8. Pets are not allowed on site.

9. Cameras and video cameras are not allowed inside the cave; please leave them at the ticketing booth.

10. Remember that cell phones do not work underground.

11. Cave slowly. You will see and enjoy more!

Special rates applies for corporate bookings and for schools and universities of Oman .

Photography is not allowed inside the Cave due to scientific reasons, applying this restriction you are helping to protect this non-renewable natural resource and become environmentally friendly.

Tour is not recommended for people with claustrophobia or those who suffer from back ailments, asthmatic, high blood pressure or pregnant women (last months of pregnancy).