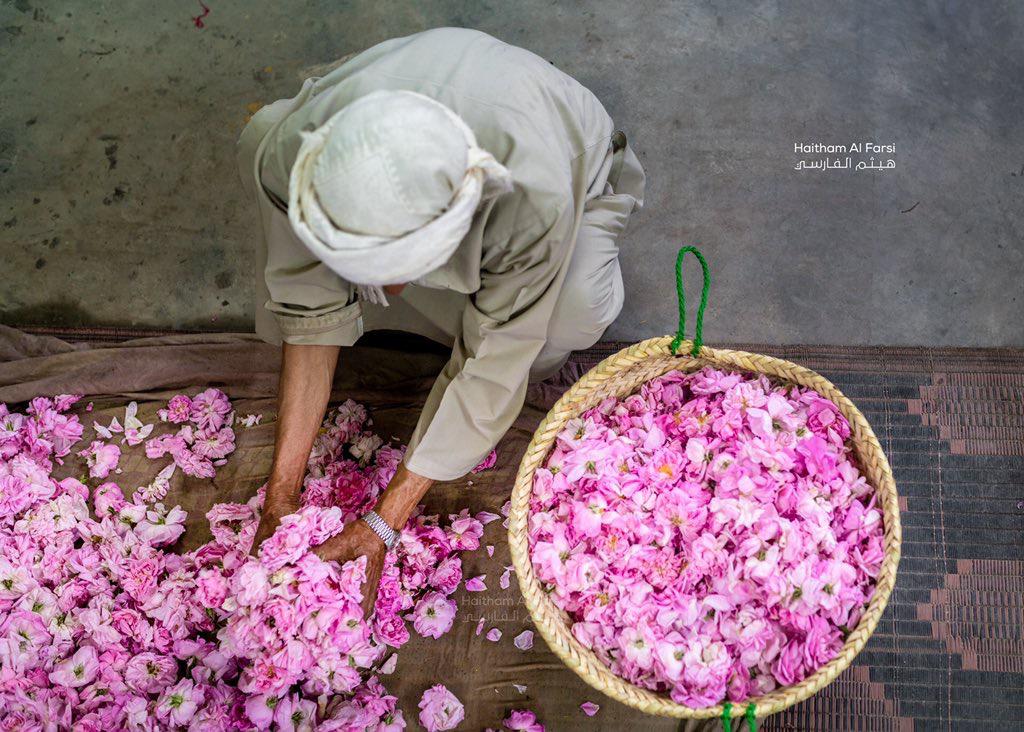 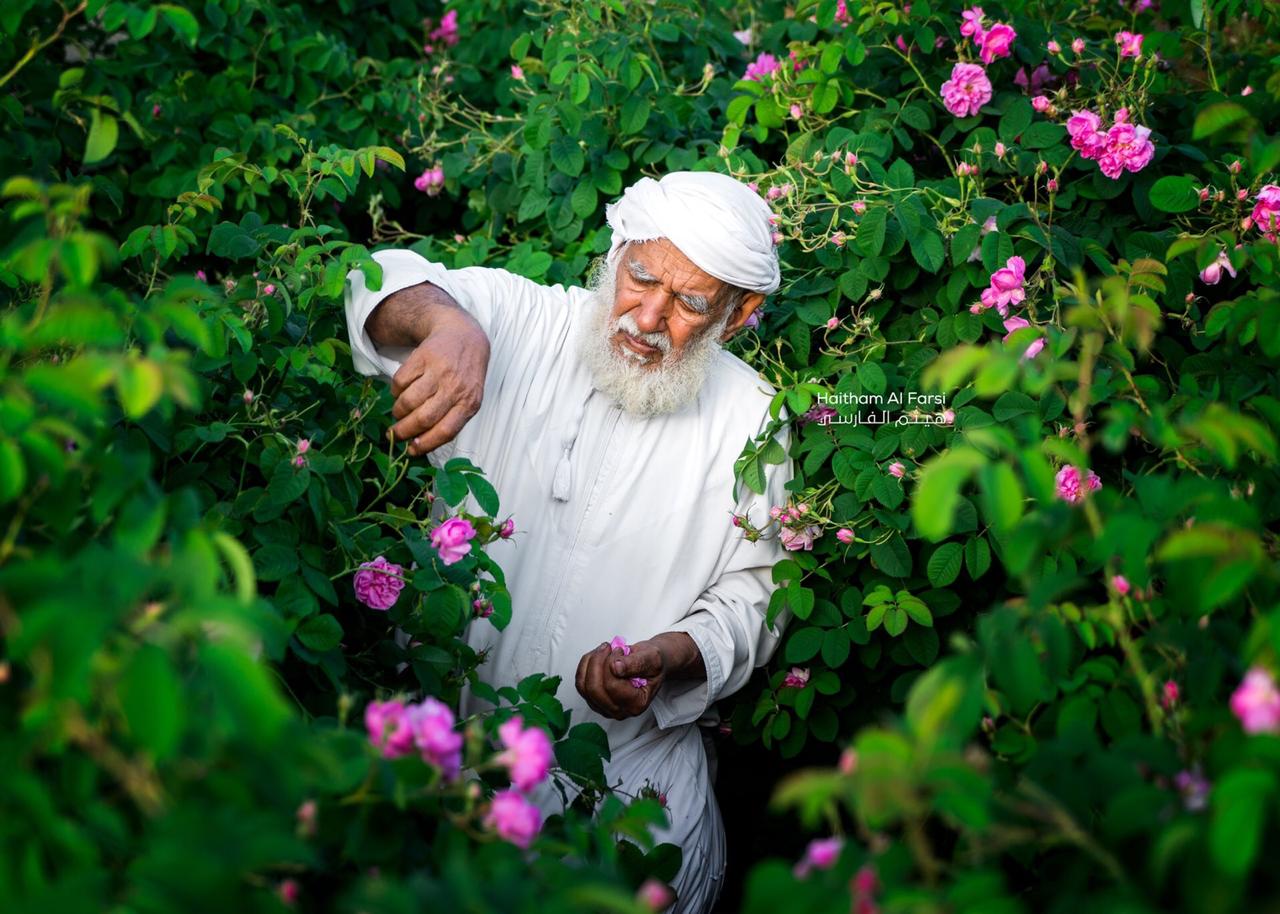 Between late March and the start of May, one stretch of undulating the landscape of Oman’s green mountain is laced with the roses, which provide a feast for the senses. The landscape is a spectrum of colour, and cliffs laden with roses add to the palette of shades resplendent in around 90 rose orchards. The place can rightfully be called the GCC’s ‘Sultanate of fruits’ with a range of luscious fruits like pomegranates, olives, walnuts, pista, almonds, apricots, peaches, pears, plums, figs, grapes, lemons and wild berries grown in different seasons. But what delights the senses here is the rose season.

The cultivation of the Damask rose (Rosa x Damascena trigintipetala), fondly called ‘mountain rose’ is processed into rose water. The roses here are almost similar to the famous Bulgarian ‘kazanlik’ variety. Little wonder then the region is home to 7,000 rose trees scattered in around 90 farms. Throughout the seven-week period, rose-pickers wake up just before dawn to pluck the blossoms from the stems and collect them into baskets. The baskets are then brought to a home unit, usually a cliff-side settlement, which is equipped with traditional ovens and other rustic equipment to make rose water. Jabal Al Akhdar’s rose water has won acclaim from all over the GCC as Arabs from the region converge on the mountain villages to buy crates of bottled rosewater. It is a relatively moderately-priced product sold for medicinal, culinary and celebratory purposes. farmers in Jabal Al Akthar still practice the craft of two-step distillation as it was done in bygone eras. The rose petals brought to extraction units are scattered on a mat or cotton cloth to keep them fresh and then poured over the traditional mud ovens, locally called as Al-duhjan. They are then distilled. After distillation, the petals are allowed to simmer gently for about four hours in a vessel called ‘Al-burmah’, which is covered by another vessel made of copper. As it boils, water flows from the petals into the copper vessel. The old petals are then replaced with fresh petals using a traditional tool. After boiling, the rose water is poured into a large pot known as ‘Al-karas’, where it remains there for at least 30 days. Then, the rose water is ready to use and is bottled and either sold at the place of production or taken for sale. All the roses harvested on that day are processed within the same day. Lots of foreigners buy bottled rose water from these home units. Each rose bush yields about 15-20kg of petals during the season, while it takes about 2kg of petals to generate 750ml of essence, valued anywhere between RO5 and RO8.

Rose cultivation and distillation have great potential and can yield revenue. The government, on its part, is also engaged in promoting the manufacture of rose water. It has, under the aegis of the Public Authority for Craft Industries (PACI), established a modern distillation plant in Shujeirah in Jabal Al Akhdar.

However, tourists still prefer rose water distilled the traditional way. Its primary use is meant for culinary, medicinal and celebratory purposes. A must in every kitchen in Oman, rose water is used in many meals and for making Omani halwa. During Ramadan, the use of rose water is common. It is often employed as a favouring agent in sweets, custards, jellies, pastries and in other desserts like sheerkhorma, kunafa and luqaimat etc. Rose water is a great way to refine the everyday glass of tea. Tradition maintains that rose water is beneficial for the heart and gut. Known for its anti-inflammatory properties, it helps soothe skin irritation and skin conditions. The use of rose water makes one’s skin feeling refreshed and nourished instantly. It also finds a place in the preparation of traditional cosmetics. The black eye-liner called kohl that is used as a sort of medicinal eye shadow, is sometimes mixed into a paste by liberal drops of rose water, which is believed to help impaired vision and counter eye infections. Hand-held rose-water sprinklers, traditionally crafted with slender straight necks and bulbous bottoms, have a time-honoured role in festivities. To welcome and mark the end of a wedding banquet, rose water is sprinkled on the hands and faces of guests.

In the home, an exquisite, rich-looking rose-water sprinkler is a symbol of hospitality. Arabs, whose passion for anything fragrant is legendary, have distilled roses and other flowers for making rose water as early as the ninth century. So, the time has come to engage the senses with Jabal Al Akhdar’s roses and bring home a few bottles of rose water prepared in a traditional way.